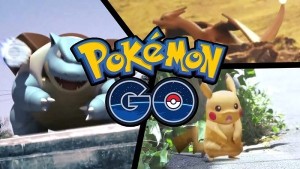 If you’ve hung out with anyone under the age of 30 lately–or if you’ve just walked down a sidewalk–surely you’re aware of the crazy new phenomenon Pokemon GO!

If you’ve somehow managed to miss it, Pokemon GO uses GPS information to place virtual Pokemon (little cartoon creatures kids love to collect) all over the real landscape of your town, no matter where you are. Kids play on an app on their smart phones, and walk or bike around their neighborhoods, searching for the creatures and “capturing” them digitally. They pop up in trees, in fountains, on public sculptures, on bike racks, on top of the neighbor’s mailbox. 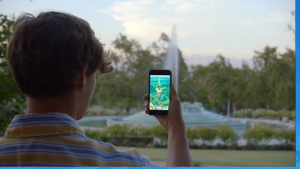 Certain places, like real stores and churches and parks, are also identified as “gyms” where kids can bring their captured creatures to battle with one another for supremacy.

My own kids have been freaking me out with it, saying things like, “Mommy, there’s a Squirtle on the printer right beside you,” or “Hey, look, we’ve got a Flarion in the passenger seat!” They point their phone at it, and they can see it, throw a red and white “pokeball” at it, and claim it for their own.

Look around you when you’re outdoors–I guarantee you’ll see pairs or trios or larger clusters of kids running around or huddled around their cell phones saying things like, “I heard there was an Onyx in a truck somewhere near here,” or “How many have you caught since we left home?”

Here’s a random pair of teens my sister saw out for hours in her neck of the woods. IN. THE. FRESH. AIR.

After weeks of me begging them to get off the couch and go out and enjoy the summer sunshine, my own kids actually BEGGED to get their bikes out of the garage, and the dog has been getting three long walks a day. I even got to capture a rat-shaped Pokemon myself, which my daughter promptly named “Mom.”

So why am I writing about this on the Nice Girls Writing Naughty blog? Really, truly, there’s nothing naughty about it (though I’m a little terrified of the idea that this company is getting scads of info about our young people with this….like, if they decide they want to round up all the children to join their robot army or something, they’ll know exactly where all the kids are….)

What I like about it is the sheer enthusiasm and excitement about getting out and running around.

Reminds me of my childhood summers, when we’d just run wild outdoors as long as the sun was out, and play flashlight tag for another hour after the sun went done. We’d come home grass-stained up to the knees, and happy.

I’m glad to think kids today are getting a little piece of that.

What do you think? Are you seeing kids (and some adults) going crazy over Pokemon GO?

2 responses to “Water Cooler Wednesday: Are You on the GO?”

Do you love reading sizzling hot romance? Then join the Nice Girls Writing Naughty Readers’ Group! It’s THE place to interact with the Nice & Naughty Girls!

Who Are the N&N Girls?

Look for special details and events on both the blog and our Facebook Group!